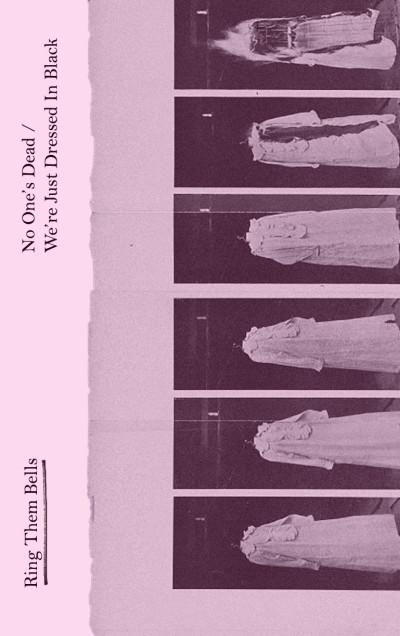 Copenhagen’s Ring Them Bells are no strangers to rock ’n roll. No One’s Dead / We’re Just Dressed in Black reflects the four members’ mutual enthusiasm for noise rock and massive soundscapes. Powerful riffs provide a central focus to support the surging melodies and vocals. This is classic songwriting with the backbone referencing the ‘60s soul and blues era, combined with psychedelic and noise influences. The sound runs the spectrum from the experimental rock of the Velvet Underground to the psychedelic rush of The Brian Jonestown Massacre to the feedback-laden melodic noise rock of The Jesus & Mary Chain.

With this new full-length album, Ring Them Bells dig deep into the heart of rock music and claims a position as one the best current Scandinavian rock acts. There is no fear or limitation – all tracks on No One’s Dead / We’re Just Dressed in Black are recorded proof of a band that went into the studio determined not to compromise their creative vision. The band deftly integrates intelligent songwriting with hefty explosions of noise and searing, feedbacking guitars that devastate and ravage. The four-piece act has created a powerful record that penetrates your mind and leaves no room for apathy.

No One’s Dead / We’re Just Dressed in Black was recorded in Oslo and Copenhagen deep in the darkest, coldest winter when the way out seems completely impassable. Winter night has put a significant mark on the artistic work around the album’s genesis, but the songs are also complimented by brighter sounds, where the mental desperation of the dark night is challenged by the need for light and freedom. The Nordic winter cold has been translated into powerful central riffs surrounded by a ton of flowing melodies and rich, seductive vocals. Ring Them Bells have crafted this album in a creative collaboration with the Norwegian producer and sound magician Marcus Forsgren (Jaga Jazzist, Serena-Maneesh, The Lionheart Brothers) and musically combines the band’s passion for experimenting with noise rock and grandiose soundscapes.

Their first and self-titled album showed a band with big ambitions and a new take on creating intelligent rock music. With their new album, No One’s Dead / We’re Just Dressed in Black, Ring Them Bells has condensed their sound even further and stands out as a truly unique rock act.

Ring Them Bells are not novices to the music scene: Johannes Nidam (guitar and vocals), Jan Johansen (guitar), Moogie Johnson (bass) and Johannes Dybkjaer Andersson (drums) have all played vital rolls in various successful and critically acclaimed Danish bands throughout the years. All four have roots in experimental, alternative rock and various successful Danish bands, ranging from pop to rock to electronic. Every member has had an international music career, and the band’s guitarist, Jan Johansen, has toured with Neil Halstead of Slowdive/Mojave 3. In the past few years, Ring Them Bells have played countless concerts and festival shows in Denmark, Sweden and Norway and were invited to Nordklang Festival in Switzerland and the Øya Festival in Oslo. They were also invited by David Eugene Edwards of Wovenhand to support them on their tour in Scandinavia.